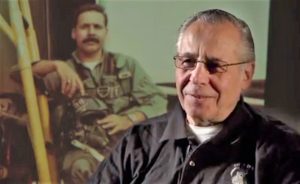 Lt Colonel Sheldon A. Goldberg enlisted in the U.S. Coast Guard Reserve on 24 October 1955 but transferred to the U.S. Air Force on 18 March 1956 and was assigned to the 3700th Basic Military Training Wing (BMTS), Lackland AFB TX for basic training. A clarinetist since the age of nine, Col Goldberg successfully auditioned for the Air Force band system and upon graduation from basic training, was assigned to the 702nd Air Force Band, the SAC Command Band, Offutt AFB NE in June 1956. In December of that year, he was reassigned to the 686th AF Band, the United States Air Forces in Europe Command Band in Wiesbaden, Federal Republic of Germany where he remained until Aug, 1960, when he was accepted to Air Force Officer Candidate School (USAFOCS).

Colonel Goldberg graduated OCS and was commissioned a Second Lieutenant on 24 March 1961. Following Undergraduate Navigator Training at Harlingen AFB, TX where he was awarded Navigator wings in January 1962 and Advanced Navigator-Bombardier at Mather AFB CA, which he completed in Sep 1962 and where he was promoted to First Lieutenant, reported to the 4th Air Transport Squadron, 62nd Troop Carrier Wing, McChord AFB, Tacoma WA, flying the C-124 “Globemaster” and in Sept 1966, transitioned to the all-jet C-141 “Starlifter.” While at McChord, he began taking on-base courses from the University of Puget Sound, was promoted to Captain in 1965, and in 1967 received a BA in Political Science with Departmental Honors and life membership in the National Social Science Honor Society, Pi Gamma Mu. He subsequently won an Air Force approved graduate scholarship from the University of Wisconsin in Madison, where he received an MA in Soviet and East European Studies in June 1968.

Following graduation from the University of Wisconsin, Col Goldberg was assigned to DavisMonthan AFB, AZ and George AFB CA for flight training in the two-seat F-4 Phantom fighter. Upon completion of F-4 training in May 1969, he was sent into combat as a Weapons Systems Officer (WSO) with the 497th Tactical Fighter Squadron (Nite Owls) of the 8th Tactical Fighter Wing (Wolfpack) at RTAFB Ubon, Thailand. As a member of the Nite Owls, the only night-dedicated fighter squadron in the U.S. Air Force, he flew 27 missions as a night fast-moving Forward Air Controller (FAC) in the shortlived “Owl FAC” program, as well as air cover for the then relatively new AC-130 “Spectre” gunship. Col Goldberg also participated in a FAC exchange with the Navy aboard the USS Coral Sea in the Gulf of Tonkin that included flying off the carrier on a night mission to Haiphong. Lastly, he was in the lead aircraft of the second of two flights of four on the first authorized mission against North Vietnam in February 1970. Upon completion of his combat tour, Col Goldberg had flown 214 combat missions, of which 187 had been at night and 3 over North Vietnam. For his actions in the war in Southeast Asia, Col Goldberg was twice awarded the Distinguished Flying Cross with “V” device and 17 Air Medals.

Col Goldberg returned from Southeast Asia in March 1970 to Cannon AFB NM where he served as Chief, 481st TFS (F-111) intelligence section and an instructor WSO. His stay at Cannon was shortlived however and in November 1971, he was assigned to the 77th TFS, 20th TFW (F-111) RAF Upper Heyford, in the United Kingdom. Thus began the first of three consecutive tours (10 years) in Europe. In 1975, he was selected to be the USAF Liaison Officer and AF Advisor to the Commandant, German General Staff College, Hamburg FRG, where he was promoted to Lt Colonel. This was followed by a tour as Air Staff Policy Officer for the Central Region at Headquarters, Allied Forces Central Europe (AFCENT), Brunssum NL. In August 1981, Col Goldberg returned to the United States and was assigned to Maxwell AFB AL, where he served as Chief, National Security Affairs Division, Air Command and Staff College (ACSC) until 1983 and then as Chief, Dept of Curriculum Development, School of Associate Programs, Air War College (AWC) until his retirement on 1 August 1985.

Following his retirement, Col Goldberg worked for a short time as an independent consultant for the Institute of Defense Analysis in Alexandria VA after which he began a 16-year career in the Central Intelligence Agency, retiring in May, 2002. He then went back to school and in May 2012, earned a Doctorate in Modern European History from the University of Maryland. His dissertation on the rearmament of West Germany after World War II was recently published by Ohio University Press as From Disarmament to Rearmament: The Reversal of US Policy Toward West Germany, 1946–1955

In his free time, Col Goldberg is active in several Veterans Service Organizations. He is currently the Commander, National Capital Area Maryland, DC, and Northern Virginia) and Senior ViceCommander, Region IV of the Military Order of the World Wars, the National Executive Committee Representative for the Department of Maryland, Jewish War Veterans of the USA and the Adjutant of JWV Post 692 in Rockville MD, and lastly, he is the Docent/Historian at the National Museum of American Jewish Military History in Washington DC. In this latter role, he gives tours at the museum and speaks to groups on the role of Jewish Americans in the defense of the United States since pre-colonial times.

Col Goldberg is married to the former Waltraud Reinhard and they reside in Silver Spring, Maryland. They have a daughter and a son – a second son is deceased – and three grandchildren.

The Jewish War Veterans of the USA, organized in 1896 by Jewish Veterans of the Civil War, is the oldest active national veterans’ service organization in America. Among JWV’s activities are: promoting legislation assisting veterans, sponsoring projects on Jewish communal concerns, support of Israel, advocacy for Soviet Jewry, and combating anti-Semitism. JWV is your voice on Capitol Hill.

Dues may be paid annually or Life Memberships are available for Active or Patron Members.